“Are you ready for the most fun you’ve had listening to an album? No? Too damn bad, because Puttin’ On The Foil are set to unload all over you with Fired Up, Ready To Roll. This album has literally a little bit of everything but the kitchen sink and rap music on it and it’s a country, rock, punk, metal party if there ever was one- even if there was one, it wouldn’t matter- this is the party.” – The Front Row Report

“Shirtless dude in overalls? Check. Long-haired fella in a Canadian Tuxedo? Check.  Bottles and blunts? Ok we are ready. Puttin’ on the Foil are Calgary’s premier hillbilly punk act…” – Calgary Is Awesome

“If you are looking for a great philosophical punk album to bring a smile to your face on a bleak day then look no further than ‘Fire Up, Ready to Roll’, from Calgary’s Hillbilly punks, ‘Puttin’ On The Foil’.” – Punk Globe

“Now here is one Fuck of an album especially when it comes to the lyrics in the song. The album is a cross between country, Metal and Rock. The lyrics, how in the hell do I even start explaining the lyrics in this album. For me the lyrics are some of the funniest ones that I have heard in a real long time and that actually work within the song. If you are a fan of the Trailer Park Boys or just Construction humour and Country living humour then you have to check this album out.” Kingston Music Reviews

“Despite being a comical band, Puttin’ On The Foil have been able to create an album which demonstrates their potential. All three members are actually rather talented musicians, like Steel Panther, who just enjoy creating hillbilly rock. If you do not take yourself too seriously then you could easily enjoy this harmless rock album.” – Ghost Cult Mag

“What can I say about this album? I say, grab a beer, turn it up loud, get out your air guitar, and bounce around the house like a lunatic!” – Midlands Metal Heads

May 30 – Abbotsford, BC – Foundation Bar 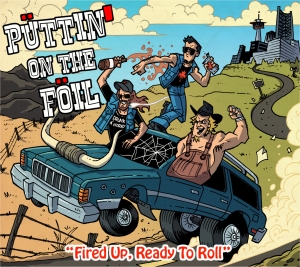 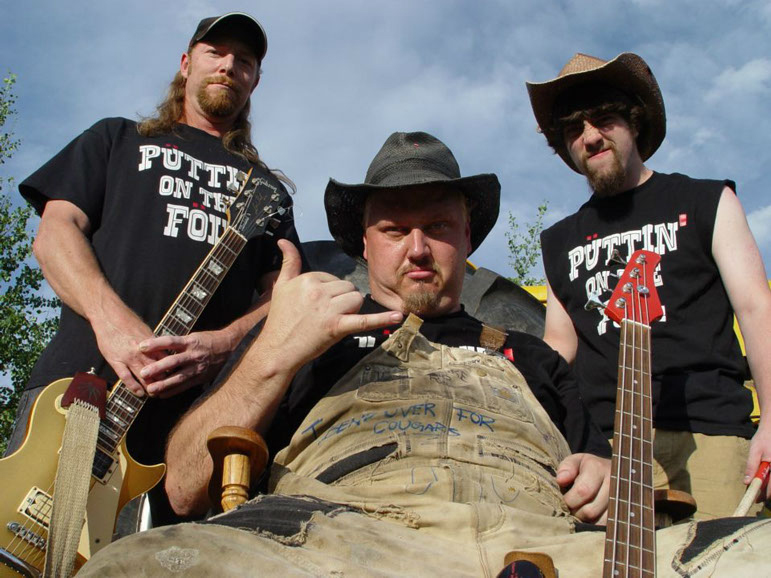 Calgary is home to three of the most important Hillbilly’s you will ever need to know — Puttin’ On The Foil. They plan to make you a part of their singin-a-long, drinkin’, good time trainwreck with their electrifying, kickass punk’n roll music.

Since 2011 these small town renegades have been touring the hell out of any weekend that comes their way. In 2014 the band played over 130 shows across Canada. The band’s name is an homage to the film ‘Slapshot’ where the Hanson Brother put foil on their fists to do more damage during fights in the hockey themed movie. Puttin’ On The Foil plans to do the same with their upcoming sophomore release, ‘Fired Up, Ready To Roll’, slated to be released on May 12, 2015.

The band is a three piece consisting of Trayne Rekk on Bass/Vocals/Stupidity, TimTim plucking Guitar/Vocals and Jordan Stubbs on Drums. Rarely sober the band’s infectious music invites even the most conservative wall flower to act stupid. One would expect the band to have influences like KISS, SLAYER, and Iron Maiden, but Trayne blames Hank Willams Jr. for much of his blue collar topics.

Puttin’On The Foil’s signature sound starts with Hank Williams, toss in some Ramones, thickened with Motorhead, and a dash of Nashville Pussy gives it that good time feel. Fans can be sure to understand the bands incredibly love of a good time from their music and live shows. Be sure to catch this three man circus on tour in 2015.