“or those of you who are unfamiliar with the band, I would describe their sound as something like a mix between VOLBEAT and GODSMACK, but noticeably heavier and with a much more serious tone. There is also a prominent groove element present, particularly in the hostile, no-nonsense opener “Hypocrite” as well as the blistering riffs of the high-octane title track. I know that Metal fans pride their music on remaining mostly an underground phenomenon, but I could totally hear these guys on the radio, which I don’t say to simply lump them in with the legions of today’s jock-rock bands. They definitely have the songs to back up their superb musicianship, with a precise yet pummeling rhythm section synchronized expertly with the guitar riffs.” – Metal Temple

“…the latest effort from BLIND RACE paints the picture of a band firing on all cylinders. A mature, dynamic, and memorable release, fans of Alternative and traditional Heavy Metal alike will find a lot to like on “Come And Get It.”” – Metal Temple

“I would encourage anyone to take the time to check out the Come And Get It EP as you will find yourself quickly drawn in.” – The Front Row Report

“Whoa! Talk about an EP that wastes no time knocking you off your feet….it certainly leaves a lasting impression. In such a short time it manages to knock you down, pick you up, sweep you off your feet again and buy you a drink. Come And Get It offers a variety of tunes, each with an unmistakable catchiness that seeps through its emotional, aggressive nature. I wasn’t familiar with Blind Race before, but if this is a snapshot of their sound, I will have to put an end to that state of ignorance!” – Target Audience Mag

““Come And Get It” is the second EP and third release overall from the heavy metal band Blind Race from Toronto. This is a really great EP and if you like bands like Pantera, Five Finger Death Punch, Alice In Chains and Godsmack then you should check this out. This EP has plenty of adrenaline pumping shout along anthems and a great groove that is perfectly infused between thrash riffs and grunge and the transitions flows quite naturally…I am pretty sure that anyone who simply appreciates metal, regardless of its form, will find something for him/herself in this kick-ass piece of groove.” – Melodic.net

“If you are looking for a quick shot of Metal and Rock into your system then you definitely need to check out Blind Race brand new ep Come And Get It.” – Kingston Music Reviews

“Listening to the Come And Get It EP from Canadian intensive rockers Blind Race, is like being run down by a fully loaded juggernaut with its throttle fully open and subsequently being caught on its axle and dragged for the ultimate ride. Five tracks which predominantly stomp like a bear in heat, the release is a muscular confrontation using the listener as its plaything and rewarding with some of the most voracious and ferocious rock ‘n’ roll heard in a long time. The band’s third release, Come And Get It sums up their intent and the EP’s unbridled invitation into their compelling sonic devilry, and though it may not be bulging with startling originality it is hard to remember a fusion of rock and metal more enjoyable and anthemic this year.” – Ring Master Reviews

“strong, aggressive, and hard driving. The first two tracks especially deliver a heavy punch, the kind of thing that will certainly get audiences roused and ready to stomp about….The guitar solo on that track (Hopeless), however, was well worth a listen. It’s a highlight of the album; check it out.” – Sea of Tranquility

“this EP will definitely be satisfying your need for metal and hard rock. When you first take a listen, they will bring to mind great bands like Godsmack, Soil or Volbeat but then after you listen closer, you can definitely discern their own unique sound shining through.  You will become hooked!” – Music Junkie Press

“these songs (EP Come And Get it) should appeal to fans of Godsmack, Bobaflex and Five Finger Death Punch.” – Palace of Rock

“I spent a good portion of my time head banging to this tune (Come And Get It). That’s how much High Octane Fuel Driven this song was to me. What set’s this band a part from most Metal bands is their Vocalist – Tommy Geraldes. In my humble opinion – I like how Blind Race incorporated Classic hard hitting Heavy Metal with the new Metal sound of today and it show with the help having a shredder like (Mike Langford) producing it…. Good Job!” – Maximum Threshold

“Blind Race blast out sustain driven and acoustically inspired slabs of no nonsense rock, heavily influenced by 90’s masters but embed with a new energy that make them deserving of a massive following”  – Spenny Bullen

“a great connection with the audience at the Velvet Underground. The crowd got really engaged in the concert when Blind Race played their metal cover version of Elvis Presley‘s ”Hound Dog;” a fine version spiced up with a little bit of heavy guitar and double pedal bass drums.” – Toronto Metal Music Examiner (Live Review)

“It’s a metal meltdown of Danzig meets Down, meets Fear Factory and a little Stone Temple Pilots. This five song EP from Blind Race is short but sweet. The first two songs are vicious pieces shrapnel severing your body into shreds of hamburger. “Hypocrite” and “Come and get It” have no guitar solos, but they do not lack, slack or relax. It keeps kicking you in the groin….over and over.” – Horror Metal Sounds 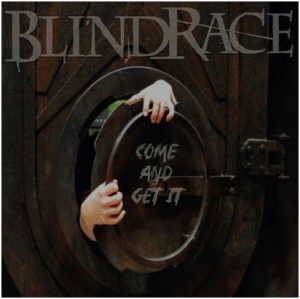 Track Listing: Blind Race – Come And Get It

– All songs performed by Blind Race

– All songs written by Blind Race

EP and Live Band Line up:

What started as two brothers and their best friend getting together for some freestyle jams and demo recordings in 2005 soon evolved into enough written material for two EPs and the birth of a new full-blown band, Blind Race, in 2007.

Drawing inspiration from their love of fast cars and the intrigue of driving them blind, as well as modern-day racial issues and the idea that we are all the same, the award nominated (Toronto Independent Music Awards: Best Live Metal Act Nomination (2012), Best Metal Act Nomination (2010)), Blind Race arrived at a name packed with meaning to match its melting pot sound.

Putting emphasis on musical identity and creativity, the then Toronto four-piece released Seeing Red in 2008, unleashed Lost in 2012 and grew to a five piece that is now ready to unveil its third EP, Come and Get It.

The powerful, heavy, dark yet bright, five track record is inspired by the many facets of life itself with song titles such as Hypocrite, title track Come And Get It, Truth or Dare, Hopeless and Gone.

“You can be up or down, but no matter what you have to keep fighting and moving on,” explains drummer Stelio Kentros. “When someone wants to take everything away from you, they can come and get it, but that doesn’t mean they will succeed.” An idea at the heart of the Blind Race philosophy.

Come and Get it is due out on November 18, 2014 and will be available on itunes, bandcamp and all major online retailers.

List of bands we have shared the stage with:

Breached, West Memphis Suicide, Left Turn City, Rise For Order, All But Over, Down In Ashes, Last Bullet, Polarity, Affinity, Kodessa, Revmatic, The Standstills, Rebel Hero, On The Verge, Sumo Cyco, Raised Emotionally Dead, Burning The Day, The Joy Arson, The Rabid Whole, Asleep Behind The Flame, Fallen Heirs, The Unchained and many more…