RIYL: Periphery, Bring Me The Horizon, Protest The Hero

“The Body Politic share a similar desire to take their art in new directions. Opening track “Vitam Agere” is the perfect intro to the EP, short ,modern and original, and something that would work well in film soundtrack. Second track “Armature” shows the band to be technically adroit but not at the expense of song-writing. “All Hands” mixes precision with power, while “Swing For The Fences” shows The Body Politic are very much making music for the 21st century. “Colqhoun” has a raw power to match its melodies. Finishing with the fine “Irradiate,” it’s clear that The Body Politic are a band with the potential to cross over to a wide audience indeed.” – Hellbound

“Watch these prog-metal masters as they rip through “Armature,” a song off of the band’s forthcoming self-released EP, Egressor… If you’re into the likes of Periphery and Protest The Hero, this song will most certainly get your blood flowing. And in all the right directions, you dig?” – Gunshy Assassin

“As sonically savage as it is melodically radiant, Egressor provides one sizeable tempest of aggression, passion, and technical invention which thrusts Canadian progressive metallers The Body Politic into a whole new spotlight. The EP is a furious yet seductive storm which is as accomplished and gripping in its senses ravaging enterprise as it is in its rich croon of melodic and harmonic endeavour. The six track encounter provides a blistering fascination and unpredictable adventure which took a short while to reveal all its glories but emerged as another of the rigorously compelling events of the year….The release impresses in many aspects, the technical craft, explosive adventure to the songwriting, and the striking vocals of Sam Britton the most striking of these.” – Ring Master Review

“This collection of songs is well produced; the clarity and power exuding through the headphones is amazing given that this group are yet to be signed to a major label. A doff of the cap must be made to those who financed and produced this EP. It delivers the intricate collective guitar work expertly with the vocals front and centre. Vocal duties are split with Sam Britton offering the melodic and thoughtful response to the hoarse rasping of Jesse Janzen who also plays bass. Special effects and background sounds come through clearly adding atmosphere and tension where needed…The album provides nourishment for those fans who like to dissect a song’s technical elements as well as fans that enjoy the overall presentation. This is an expertly put together snapshot of the group’s capabilities and this reviewer certainly hopes that it will result in a bit of major label attention and well deserved support… I would be delighted to see this band deliver their brand of honest, raw and technically fantastic music live and think that audiences over here would be very open to their brand of passionate yet technically brilliant music.” – RocknReel Reviews

“The Body Politic combines staccato rhythms with catchy vocal melodies and blends them in a killer progressive metal package. “Egressor” their new six song EP is a short but extensive slice of modern metal…The production on “Egressor” is top notch and the musicianship…there is no denying that “Egressor” is a great album…Go get your grubby little hands on The Body Politic’s Egressor” – Extreme Metal Television

“Lively yet brutally honest, their music hooks you in an intense whirl of emotions. Do yourself a big favor, listen to their song “Armature”- it is positively one of the best song of the year, bar none.” – PhilRadioCast

“The feverish energy and charisma that floats through your speakers while you listen to Egressor will leave you enlightened with a sense of purpose and motivation.”- Damnation Mag

“Wow! Yes, this is what I said, when I started listening to The Body Politic, as their latest ep “Egressor” comes at you like a locomotive engine, yet puts you at ease with their melodic vocals and melodic guitars.” – Explicitly Intense

“their newest EP, Egressor, their heaviest effort yet while still keeping the originality and captivating melodies from before…gives a little something to all participating audiences whether it’s heaviness and groove or melodic brilliance. This is one that progressive metalcore fans can’t miss.” – We Love Metal

“technical brilliance.This is an EP of six cuts that slash twenty minutes long that brings together all the ingredients for modern and advanced metal.” – Noizz Webzine

“With its six songs, Egressor is organized like a short album rather than a promo EP. It starts with “Vitam Agere”, a keyboard-oriented instrumental intro, then switches gear on “Armature”, where vocals come in. One thing that immediately struck me is how much The Body Politic’s music breathes. It is apparent that the band knows how to gage the keyboard, bringing it in only when it adds something to the whole, while balancing technique with efficiency. The 7-strings attack stands out, as well as the mechanical math-grooves and the metronome-articulated songwriting. With its cold beauty, “All Hands” reminded me of Sybreed, aside from the clean vocals chorus. There are highlights for each instruments on this EP, for example drums have a particularly nice routine on “Swing for the Fences”. While The Body Politic sounds and plays exactly like a metalcore band (think about Bring Me the Horizon or Parkway Drive), there is a clear venture on progressive territories and a mix of influences, including Opeth (“Colquoun”) and Dream Theater (“Irradiate”).” – Metal Made In Canada

“Coming from an unsigned band, The Body Politic have shown outstanding abilities that many signed acts fail to reach, due to their mainstream demand. This is certainly not the case for this band, as they have constantly produced teeth gripping music.” – Metal Temple

“The Body Politic has infused catchy keyboard hooks with harmonized and toned vocals with vicious growls and screams that is matched to ruthless guitar work.” – Kingston Music Reviews

“These guys show an uncanny understanding of how to balance disparate elements into a cohesive, pleasing whole. In fact, for an unsigned band, their ability is beyond exceptional and surpasses that of many signed acts. . . This band has a real chance to become a leader in the progressive metal field.” – Mike Korn, ReviewYou

“All Too Human shows off the whole band’s abilities, with futuristic sounds and some obviously talented musicians, they’re already way ahead of some of their contemporaries.” – Emma Newlyn, Indie Music Reviewer

“The Body Politic deliver an incredible live performance; you’ll be groovin’ and throwing down before you know it. . . With the perfect mix of hard rock and progressive metal, the songs off their latest album, All Too Human are irresistible attention-getters.” – Clayton Rourke, The Minds Eye

“A magnificent beast . . . something much more than your everyday progressive rock band.”  – Wonderful, Bravo! Review

“All Too Human is all in all a solid album. A strong debut that showcases TBP’s talent and diversity . . . it’s a good thing when I hear every sonic element perfectly balanced on a record.” – MusicEmissions.com

“Make no mistake, these are virtuoso musicians, mind boggling performers and very, VERY funny dudes to hang out with at a party. I’m serious. They tell jokes.” – The Soundbox Recording Studio

– All songs performed by The Body Politic

– All songs written by Matt Aasen and The Body Politic 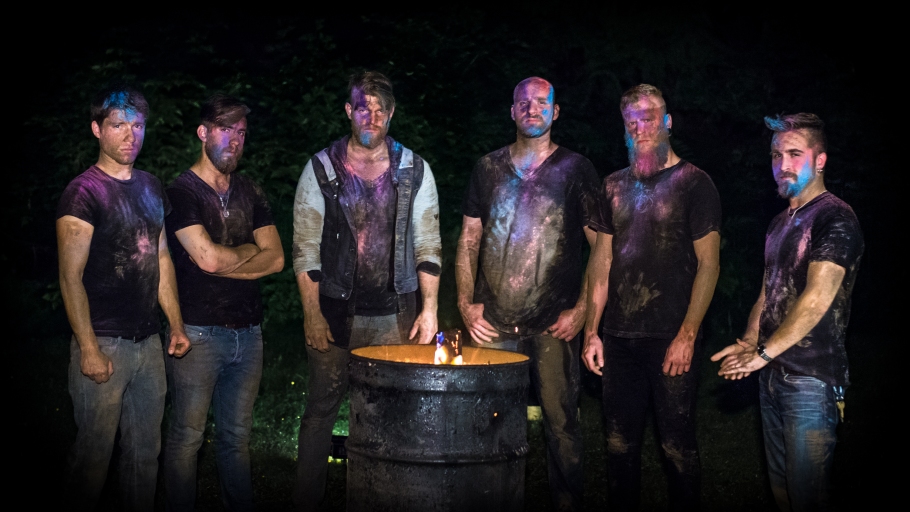 Hailing from Vancouver Island, The Body Politic can best be described as a six-piece powerhouse of poly-metric grooves, aggressive screams and soaring vocal melodies, pushing the boundaries of modern metal music.

Taking its name from a Clive Barker short story and shifting gears from jazz (which most of the members studied at Vancouver Island University) to progressive metal, the band released its debut album “All Too Human” in 2011.

While The Body Politic’s music ticks all the progressive metal boxes, the group’s songs are also emotionally charged and incorporate an element of playfulness, which makes them stand out in a vast metal crowd.

After embarking on several Canadian tours full of wildly energetic performances (including opening spots for Tesseract, Protest The Hero and Scale The Summit), The Body Politic’s new EP “Egressor” is scheduled for release on September 16th and promises to bring out even more of the band’s technically impressive musicianship while highlighting raw, honest emotion.