Nominated for Best and Upcoming Band for 2013 – Radio Riff

Named discovery of the year 2012 – Québec-Métal

“Montreal’s BornBroken simply go for the throat and never let up. Their debut record The Healing Powers of Hate is a no holds barred punch to the face. Combining the aggression of Lamb of God with the riffs of Pantera makes for a modern day polished metal release. A concept record based around mankind’s ability to overcome adversity and rise up against it, the message is powerful and thought provoking.” – About.com – Heavy Metal – Drago’s Dungeon: June 2013 The Month’s Best Unsigned Heavy Metal Bands

“BornBroken may be the best metal band you probably haven’t heard of. Those who love hard, heavy, angry metal are in for a treat and may find a new favorite in BornBroken. Their latest album, The Healing Powers of Hate, is the perfect combination of heavy meets melodic and combines what you’d hear from Lamb of God, Hatebreed and Five Finger Death Punch into one powerful, melodic, fist-pounding metal experience. There’s not one dull moment here and any metal head should at least check this album out. Rating: 8.5/10″ – TheFrontRowReport

“These extreme metallers have done an amazing job of combining death and thrash without treading on melodic death too much…The quality of the recording is also up to standards, including some gravity blasts that’ll have you shouting, “fuck yeah!”…This is a debut metal album of epic proportions. If it’s not the Canadian metal album of the year, it’s certainly in the running for Canadian debut metal album.” – 4/5 – Yell Magazine

“‘The Healing Power of Hate’ is a well executed album, tight and well produced, at times with strong hardcore influence. I liked the strong profile that the drums took, the guitar breaks were exciting and all the way through the vocals were first rate. The time taken to create it is very evident in the final result.” 4.5/5 – MetalTalk

“From the Canadian Mecca of metal, Montreal, comes upstart antagonists of aggression BornBroken and their debut The Healing Powers of Hate. From the opening moments of lead track “Can’t Quiet the Riot” it’s obvious these boys aim to take their hybrid of groove metal and metalcore and jam it right down your throat. Drawing heavily from the likes of Pantera and Lamb of God, the first meal of the day is a pit-ready anthem. Working off catchy as fuck, breakdown inflected riffs BornBroken mercilessly pound the listener to pulp. There is absolutely no doubt people leave a BornBroken show with injuries.” – Hellbound

“Montreal Metalheads spawn a beast of a debut album…Over the years, there has been the odd occasion when a debut album has really struck me between the eyes, knocked me to the ground and given a damn good slapping (in the musical sense of course). Here is the latest in that line, an album of intense and brutal passion mixed with a groove based element that had me hooked from track one.” – Planet Mosh

“This album is 44 minutes of pure adrenaline infused death-thrash metal at its finest. The Healing Powers Of Hate captures the voice of ‘the broken’ and grants an identity to the thousands of so called misfits that struggle to find a place in our society. Marching to the sounds of brutal bass, slamming percussion, high-speed guitar solos and violently powerful vocals, the broken shall rise.” – LouderThanHell – 5/5

“The Healing Power of Hate is a great example of why Canadian metal is regarded around the world as being of very high quality: Because, quite simply, it is”. – GoetiaMetal

“I especially liked the guitars’ tone and the bass omnipresence, which add a thick extra layer of heaviness to the overall sound and prevent the album from feeling too polished or light. A well-crafted album without frills: as I mentioned above, BornBroken is not here to be cute but instead to knock you out with a direct hit in the face and they achieve this perfectly.” – Metal Made In Canada

“I was sucked in after the first couple of songs and if I had a label I would sign them in a heartbeat! I understand that this release was self-produced and if that is the case these boys are ten steps ahead of the game and will have labels banging through their doors in no time.” – XplosiveMetal

“Many of the hooks and riffs are excellent, they absolutely destroy my speakers, and the bedroom mosh commences.” – MetalStorm

“this record succeeds because it is so damn fun to listen to and the aggression seems just 2nd nature to these guys.” – Imhotep

“I thoroughly enjoyed “The Healing Powers of Hate”. It’s got breakdowns, screaming solos and funky bass, three of my favourite things. I also liked the way the band incorporated other non-musical features, such as the sounds of sirens and spoken lyrics. It’s hard to hate on this album, despite the healing powers the emotion offers. ” – Metal Temple

“The Healing Powers Of Hate is the debut release from these up-and-comers and is loaded with hard-hitting riffs and even heavier breakdowns. With this album BornBroken have resurrected the intense metallic sounds of bands the likes of A Life Once Lost, Hatebreed, Nora, and Arise And Ruin that once dominated the North American metal scene. It’s wonderful to hear a band like BornBroken bringing back what some might consider the peak sound of modern metal.” – PureGrainAudio.com

“Musically, BornBroken are a more solid, and extremely heavy, lot. Simon Savard and Mike Decker’s surging, Dimebag Darrell-inspired grooves hit like haymakers throughout, aided by the sort of dry, ultra-punchy production Terry Date used to achieve such brutal majesty with Pantera, Unearth, Deftones and on White Zombie’s Astro Creep: 2000. The sound here is huge – especially for a self-released effort – clear and quite pummeling.” – Metal-Rules

“It’s not often when you find yourself deep inside of a storyline with an album especially a Metal album, and this is exactly where you find yourself being drowned in throughout The Healing Powers of Hate. Every lyric and every song has a purpose and sheds the tearing storyline that is BornBroken. Throughout every well timed riff through the endless pounding of the skins and through each scream and Growl BornBroken brings you down to their deep hell and shows you their vision through The Healing Powers Of Hate.” – KingstonMusicReviews

“BornBroken deserves broad attention. They’ve already made a very big impression in their native Montreal, both for their live performances as well as their music in general. I honestly don’t know that much about the Montreal metal scene, but I do know that it is getting bigger and more competitive. For these guys to emerge as a local favorite suggests something of their overall quality. Give this one a spin.” SeaofTranquility – 4/5

“BornBroken’s Healing Powers Of Hate is a powerful album that falls in line with the likes of Pantera, Lamb Of God, and Hatebreed with some thrash inspirations from the likes of Testament, and Slayer.” – Emurg.com

“I must say that BornBroken’s amalgamation of melodeath, metalcore and modern thrash works very well. It is well balanced and captures only the good aspects of these three genres, reminding us that, despite all the not-so-interesting bands that roam the three genres, melodeath, metalcore and modern thrash do have a lot to offer…Fans of Pro-Pain, Lamb of God, Killswitch Engage, Machine Head and a wide variety of modern metal bands should definitely check out this potent debut album.” – 4/5 – MetalMusicArchives

“What BornBroken have done here is create an album that ticks pretty much every box on the seriously heavy tick sheet, managing to put together an album which is heavy, melodic, dark, haunting, and yet uplifting at the same time. Representing the pain and angst that went into making it, this album will connect with your soul, and remind you of what heavy is.” – Loud-Stuff.com

“I was digging these guys all the way through and just wanted to keep playing the album over and over again. If you were to mixed elements of PANTERA, SEPULTURA, HATEBREED, SLAYER, LAMB OF GOD, HAVOK & SLIPKNOT together you would end up with BornBroken. They have been building up a following of fans in Canada and now are ready for the world. They have a fan for life in me now!” Beowolf Reviews

“The track Control has a super hooky melodic line that rides over a thicker groove.  It really fills my body with warmth while also making my blood boil.  This echoes with a bit of Gothenburg stylistic trappings without going overboard.  It really is a tasty riff.” – Nocturnal Cult

“So watch for it. Listen to it. These Montreal Metal Thrash-core compadres are definitely onto something different, and not only with regard to the local scene, but for Metal in general. The BornBroken boys are biting off as much as they can chew by creating a heavy-duty concept album, fusing the powers of all their influences and generating a sound that fluctuates between latter day Sepultura and mid-career Lamb of God.” – BetweenTheHorns.ca

“BornBroken is the future of Québec Metal, with 10 titles to discover, even on stage, since the group demonstrates an uncanny and totally uncommon, energetic stage presence. They have poured their guts into the making of this introductory album, their own monies and a wealth of professionalism, which must be recognized. Bravo for an excellent album that one just doesn’t tire of listening to.” – Québec-Métal 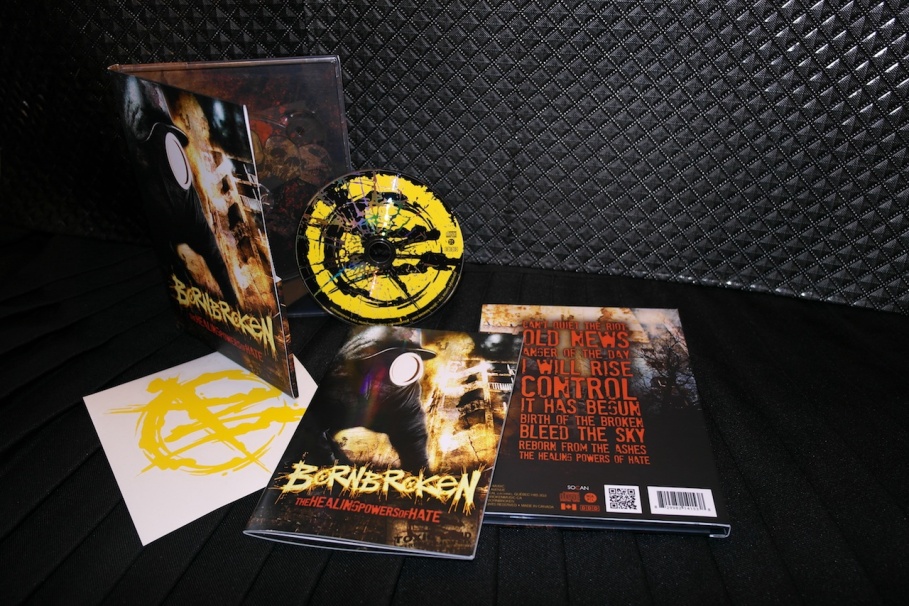 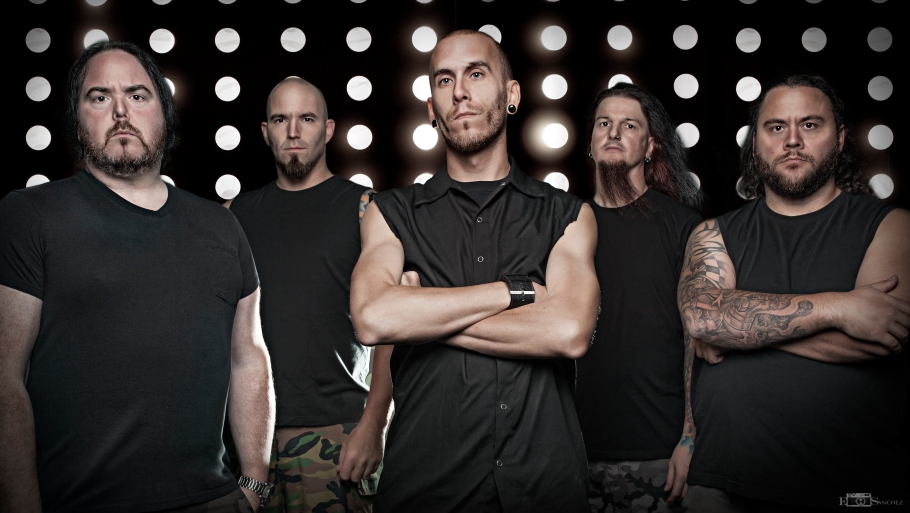 Montreal’s BornBroken was formed with one simple mission in mind: Help the masses find a voice, a face, an “X” that marks the spot through the sounds of beating skins, metal strings and broken chords.

After months of writing and hours spent in the studio, BornBroken managed to take every emotion they felt, put it to music, build off of past battle scars and create a record where listeners will feel they are part of the storyline.

On their debut album, The Healing Powers of Hate, which is set for a June 4 release, BornBroken play out not only what life has given them but also what they want to give back: truth, integrity, perseverance, loyalty and faith in humanity’s struggle for equality.

“We try to keep with tradition on this release and bring back a true dry metal sound, upfront loud guitars, drums in your face and a singer that can be distinguished from the rest,” says guitarist Mike Decker of The Healing Powers of Hate.

“BornBroken is the beaten and the fallen overcoming their outlook of a blackened tomorrow,” he explains of the band’s vision and goals. “Taking sorrow and anger and rising up from the ashes to rebuild and heal a new world from one that’s crumbling down around us now.”

It’s a truly powerful message delivered by one of the metal world’s most powerful new bands. Get ready to experience the magic moment when, finally, the broken shall rise.