“Their sound is an intense blend of death, thrash, grind and hardcore, giving the listener an onslaught of fast heavy guitars, pummelling drums, pounding bass all generously garnished with vocals that are broad ranging, varying from deep gutturals to face searing screams and that are reasonably decipherable across the tracks…eleven fierce tracks spanning thirty-four minutes, all of which are “mosh pit anthems” with a brutal groove and most are very up tempo, dense walls of sound, all of this together making the album a good listen.” – Metal Talk

“Dark Century is yet another metal powerhouse from Montreal, QC…The vocal delivery here is astounding, this dude has quite the set of pipes going on. Also, pay attention to those drums – what a great drummer. I can’t wait to rip this one in the car, I can tell from the first listen through that this is going to pound the living shit out of my poor Malibu. If you’re at all into death metal, thrash metal, and grindcore, you’ll be pleased with this seamless blend of aggression. This record is likely to scare the shit out of your neighbors and other drivers around you at red lights. ” – Counter Culture Nerd

Dark Century is yet another metal powerhouse from Montreal, QC. – See more at: http://counterculturenerd.com/blog/dark-century-murder-motel-review#sthash.cB0Ef4i6.dpuf

“(Bacon! Metal! Alcohol! Violence! I declare the bacon law! Let the vegans stop pissing us off) Here is a bold, honest and heartfelt declaration. Dark Century has the inspiration of a butcher when it comes to choosing the finest themes. The English lyrics lean towards American gore, while the French ones are swamped in dark comedy and fresh blood. It easily compares to Démence and Polishdèbin.These themes are a perfect fit for the Montreal band, whose new album “Murder Motel” is like a thick slice of bacon…an album that is highly entertaining on different levels, with a powerful production that will make your vegan friends cry. The lyrics are particularly worth checking out…” – Metal Made In Canada

“What do you get when you combine metal, comedy and bacon? You get an awesome band called Dark Century who have just released their new album called Murder Motel and it’s pretty cool.” – All About The Rock

“A release which can just as easily raise a wide grin as it can an urge to go violate something, Murder Motel is an exhaustive and exhilarating corruption from a band clad in imposing and compelling devilry. Dark Century comes with a potent buzz behind them and their new album easily reveals why as it ignites ears, imagination, and a greedy appetite for their fusion of death, thrash, grind with a viciously healthy course of hardcore. It is a release which has plenty in it to feed expectations but also comes with a just as rich soak of originality to thrust The Canadian quintet into a spotlight of its own.” – Ring Master Review

“No wonder they won the “En Route To Heavy MTL 2012″.  I especially loved the presence of the singer, he totally reminds me of Dez Fafara of Devildriver. They had a great presence on stage, and in my opinion the best sound on the Apocalypse stage. It was aggressive, it was fast…Long live Dark Century, one of the great discoveries of the festival. Who else could we get to throw bacon  in your face during their set?” – Boulevard Brutal.com (Heavy MTL 2012 Review)

“Dark Century branded Canadian crowds with their uniquely bold and bloody assault attack on the senses….I’ve mentioned here before how music serves as probably the best connection between us. You knew rhythm and felt heartbeat before you knew sight. That sometimes grinding, thrashing, double-bass blasting beat exists in you for a reason. It helps you get loud, get f*cking angry and snarly, and mosh to the beat that helps build the momentum needed for bands in it for the right reasons. Throw in some bacon, bloody knuckles, bleeding eardrums and you’ve just been fed a f*cking mind-blowing Dark Century show. ” – BarsnBands.com

“The last band of the evening was Dark Century. These guys had no special costumes, get-up, or theme. I actually met guitarist Eric Duranleau wearing a simple white tee shirt before the show, and assumed he was a roadie. That said, their stage presence was, by far, the strongest of all the bands, and they didn’t need gimmicks to get the crowd moshing. They were metal at its best: the pit they produced had people punching each other in the head, and drinking together by the end of the night. Dark Century ended up winning a Saturday spot at Heavy MTL, and you should see them live if you can.” – Vandala Mag  (Live Review at Heavy MTL BOTB)

“Very powerful and they just simply kickass. You need to check them out for sure.” – Live and Loud Magazine

“They had the chops, they had the stage presence, they brought the aggression and they whipped the crowd into a frothy frenzy. It was a sight to behold and there’s no doubt in my mind these guys could hold their own on a big stage.” – Between the Horns 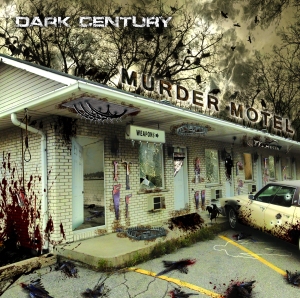 Following their heavy and aggressive 2009 debut ‘Days of the Mosh’ the band returns with a new line up and their 2014 follow up ‘Murder Motel’ produced by one of Montreal’s most respected metal producers Chris Donaldson (Cryptopsy, Mythosis, Erimha, The Agonist, Derelict, Neuraxis). The 11 track metal injection is set to be unleashed on April 18, 2014 with their first single and video ‘Kill The Crowd’ assaulting head bangers as we speak!

With an unrivaled live show accompanying their music – “We like to bring the party on stage, we’ll throw ourselves around for the whole set and often feel it for a few days. When you come see a show that has Dark Century on the bill, you’ll get exactly that: a show” – it’s no wonder Dark Century was one of the two finalists at the Heavy MTL Battle of the Bands in 2012, winning their spot to play on Canada’s largest metal fest along with sharing the stage over the years with such established acts as Aborted, Misery Index, Quo Vadis, Anonymus, Rose Funeral, Exhumed, Fleshgod Apocalypse, Goatwhore, Origin, The Faceless, Battlecross, Erimha, Fuck the Facts to name a few.

All in all Dark Century grinds and moshes a sound who’s lovers of unbridled and rabid music will fall heavy for.