“”Bound By No Fate” itself is an unrelenting and chaotic blast of thrash. Even someone who’s not primarily a fan of the harsher vocal style prevalent within death metal should be able to appreciate and get into the new Raider track and upcoming album.” – Metal Injection

“Raider pillage the best of death and thrash for their own blazing (yet fun) fury on debut LP Guardian of the Fire, out March 20. Despite only forming in 2017, the Waterloo quintet sound export-ready, and not just to nearby markets but even to the far reaches of Europe, from which many of their influences hail.” – Exclaim! 8 Emerging Canadian Artists You Should Hear in March 2020

“Fancy a slab of ballsy Death/Thrash? Then check out “Guardian of The Fire,” the debut studio full length from Canadian Death Thrashers Raider, I promise, you won’t go far wrong with this release!” 5/5 – The Metal Wanderlust

“In the end, these eight tracks combine influences from their domestic Canadian roots as well as American finesse and aggression to illustrate the power, precision, and musicianship that keep Raider in league with acts like Annihilator, Exmortus, and Skeletonwitch as far as melodies, hooks, and darkened, savage attacking mechanisms.” – Dead Rhetoric

“GUARDIAN OF THE FIRE is a non-stop hell-storm of pummeling death infused thrash. The album is full of technical riffing and some insanely powerful drumming. Raider has enough ability here to deliver up some of the best riffs in the business with a proficiency that many may possess, but rarely offer up to the masses… Fans of Exodus, Lamb Of God, Exmortus, and Deicide, among others, will find that they are going to have another favorite band to slam to!” – Metal Rules

“Canada is doing great in the thrash stakes this year, what with Warning Sign, Lutharö, Annihilator and plenty more all releasing ‘great’ to ‘phenomenal’ albums. Now the relentless machine of Raider has joined the ranks of great Canadian metal in 2020 to utterly punish and pummel the competition. Guardian Of The Fire is as high quality a debut anyone could possibly ask for, and this quintet look set to burn the world – one Ravenous Hydra at a time.” – Metal Observer

“I think RAIDER is one of the best of the new breed of bands who are playing this style of metal today and “Guardians of the Fire” is well worth your time.” – Metal Temple

“Raise your horns and headbang so hard you might just crack your skull, with “Guardian of the Fire” Raider have joined the elite [8/10]”  – Metal Noise

“Guardian of The Fire is a great album coming out in March 2020. This will be one to put on the stereo, crank the volume up to 11, and piss off the neighbors.” – Boston Rock Radio

““Bound By No Fate,”is an absolutely terrifying opener. A song that comes barrelling in with all guns blazing. It takes and takes and eventually leaves the listener gasping for more.” – The Median Man

“”Urge to Kill” is a total of three tracks with what we will say is two separate “modes”, the first of which is an oldschool style Melodic Death Metal and damn is it done well.” – Five Magics Review (2018 EP Urge To Kill Review)

In 2017, Raider naturally came together; maniacs playing death thrash in the unconventional E standard. Stating that they are fans of the inherent tightness they combine it with blackened death metal vocals and lay waste to audiences.

The quintessential Raider song starts with collaborative jamming between Gabe Rosa (lead guitar/backup vocals) and Kevin Withers (drums) improvising on the skeleton of a track. The experimentation continues with Brandon Sanders (bass) filling in with grit and Angelo Bonacorso (vocals) weaving a vocal pattern until it becomes whole. Blasts of harmony and riffs are injected until the final product is refined. Bonacorso’s lyrics stem from experiences, history, literature, our world today, and what our world could be tomorrow. At times they are a reflection of evil and at others, conquering it.

In 2018, Raider released their demo “Urge to Kill” and the band had a whirlwind summer playing on several fests including Hamilton Deathfest Guelph Deathfest and Kitchener Metalfest. Even with a short time since conception, Raider has made their name known in the Ontario region, decimating stages across the province. They have played with the likes of Exmortus, Venom Inc, Cannabis Corpse, and Aggression.

It wasn’t until 2020 that a full lineup was finally realized for Raider. Up until then, the second guitarist had been a fill-in for live shows, but with the addition of Ira Lehtovaara the lineup was complete and carving the path for their next move, the release of LP “Guardian of The Fire” set to be unleashed on March 20, 2020. 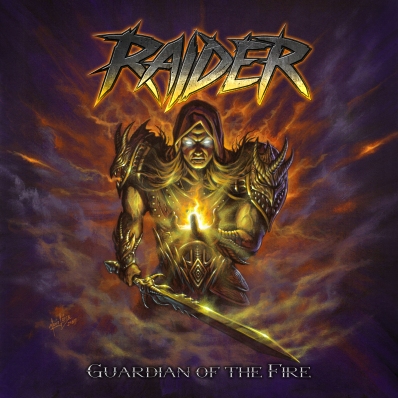